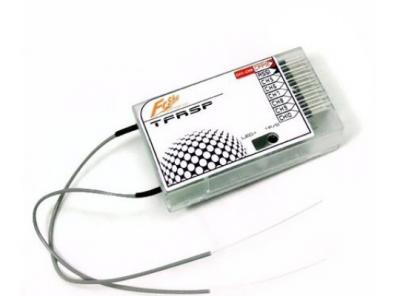 TFRSP has Combined PPM for CH1 to CH9 servo signal for CH5 to CH10 and RSSI
(received signal strength indicator) output.
CPPM is usable for reducing the wiring to some flybar-less controllers
autopilot systems and homebrew UAV systems.
Furthermore it could be used as a wireless trainer/simulator connection
similar to the Futaba WTR-7.
1.1 Compatibility:
FASST 2.4G: Air Systems (7CH Mode/Multi Mode)
FrSky TF Modules: TF-8M TF-14M
1.2 Specifications:
Number of Channels: up to 10 channels (CPPM for CH1~CH9 servo signal for CH5~CH10)
With RSSI Output
Operating Voltage Range: 3.5V~10V
Operating Temperature Range: -10â„ƒ~60â„ƒ
Dimension: 53mm*30mm*11mm
Weight: 13.5g
2.Setup
Warning: Servos are not to be plugged into Channel CPPM and Channel RSSI otherwise servos will get hot or may burn out.
Note: Increased duty means good signal reception and vice verse.
2.1 Bind procedure:
Turn on the transmitter connect the battery to the receiver while pressing receiver’s F/S button. After the RED LED is off and GREEN LED is solid the binding process is completed and the receiver is operating normally.
2.2 Setting failsafe:
TFRSP supports failsafe function for all channels. Follow the steps below to set failsafe:
1) Bind the receiver first and disable failsafe on the transmitter side;
2) Set all transmitter controls to the desired failsafe position;
3) Press briefly the F/S button of the receiver the GREEN LED of the receiver will flash twice indicating the failsafe is set up successfully.
If you do not need the failsafe function any more just re-bind the receiver to set default failsafe mode.
Warning: Some transmitter manufacturers use a failsafe method that can interfere with that used by FrSky. Be sure to disable any transmitter failsafe settings before setting FrSky failsafe positions. Unusual jitter may result otherwise.
2.3 LED status:

CPPM is usable for reducing wirings to some flybar-less controllers autopilot systems and homebrew UAV systems. Furthermore it can be used as a wireless trainer system.
All files related to the TFRSP FASST Wireles Trainer Compatible 2.4ghz Receiver including manuals and OS updates are available here: